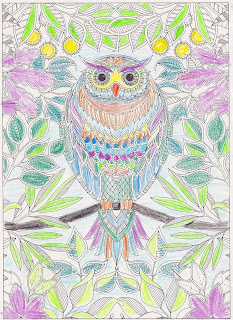 I was wondering whether I would post a regular postcard here or not. In fact, the drawing itself concerns a regular (printed, bought) postcard, made by Johanna Basford, issued in 2014 by Thoth Publishers. But the colouring has been handmade by a good friend, so I decided: Yes!

Frank and I played guitar in Below the Mole in the late eighties. Below the Mole was an important band in the Nijmegen music scene (although almost no-one knows that :-) ). We started with two guitars and drums. A bass player joined only after years. We existed for 4 years, until our drummer Rob left to Amsterdam, and in those years we had 10 public concerts in total.
Below the Mole was an underground band, not only musically seen but also literally: we rehearsed below the (former) Post Office near Nijmegen Central Station. Alas this post office and the cellar rehearsal rooms don't exist anymore.
However, to my surprise the concert hall Doornroosje has been moving last year to this location. As many others do, I'll miss the old, cosy Doornroosje and its former location. In those days I've put a lot of footsteps there, volunteering at concerts and by drawing concert flyers (and did the typography, in a pre-computer era!). And I gained some hearing loss by the noise (be warned if you enjoy music, too!).
Post Office, rehearsal rooms, concert hall.. Maybe the circle should be full this way.

So this postcard not only reminds me of the good times we shared - Frank, Rob, Arnold (and temporary Miesjel) were more than family to me - but also gives me the opportunity to share a tiny little postal and pop history of one of my favourite cities, Nijmegen.

Frank sent me this card last week for my bithday (good day to not send it on my birthday itself, because that is not a public day :-) and he added that this alas isn't a Mole. Never mind, I think it great (and will share a coloured version of our logo below). Thanks a lot, dankjewel, Frank! 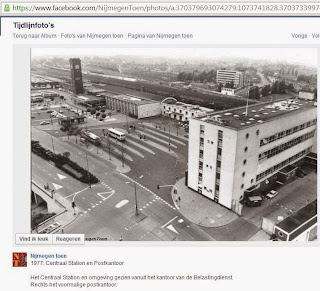 Nijmegen Central Station in 1977. The (now disappeared) large building on the right was the former Post Office. 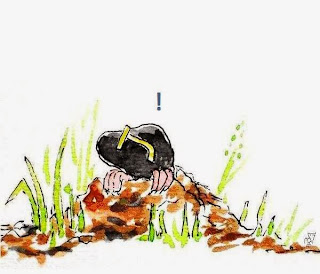