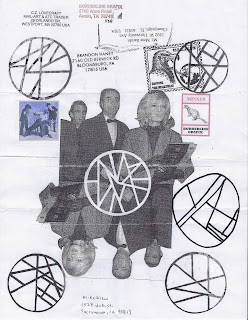 Borderline Grafix took part in some add-and-pass mail art and forwarded collage sheets.
I am the lucky receiver of some to-add-and-pass-on sheets. But first show some here. See those stamps, showing an Eagle and a minxus Mink! And of course there are a lot of human beings around. 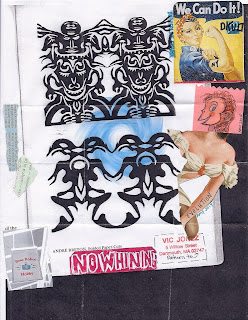 And the great envelopes (which I don't have to pass on): I like the rubber stamp print of the weird unidentified insect and the butterfly artistamp (the latter has been created by Amy Irwen, so to see?)! 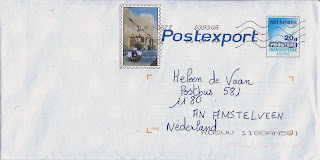 On the artistamp on the envelope Chocolatine & Stooby had sent me, there's a beautiful bird: the Seagull!

And inside a great water colour painting of someone who reminds me of the fairytale Snowwhite. One can discuss whether dwarves, like smurfs, belong to the animal world (and 'thus' to this site), but as I wanted to post him, too, I think the answer tmo is 'yes'. 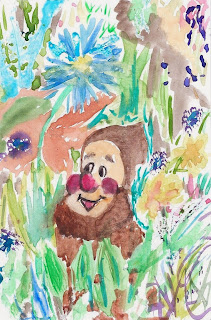 The artistamp is part of a mail art call: Pirate boat. I had a boat to draw in mind, but thinking of the link to this 'Real weird animals' blog, suddenly there came a lot of animals in mind which I could add to my pirate boat drawing to send to Chocolatine et Stooby. Animals other than pirates, like rats, the rat-chasing cat, parrots, dodos and prehistoric animals. 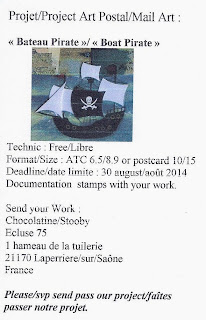 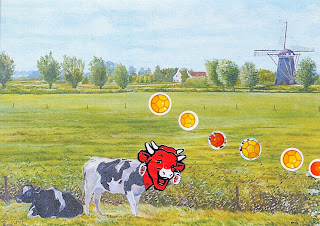 I received two letters from Eva, which had something in common. A Lion, a Cow with four horns... Does there ring a bell already?
Not with me, although I recognized the cow from Eva's Vache Qui Rit postal project. And the Lion, the shy way he looked, reminded me of a book I've seen years ago. But what would be the match between them? 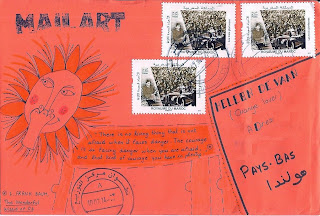 The words Eva had written outside and inside, made it all clear: both weird animals are characters from the famous story 'Wizard of Oz'. Because the book I had read in the past only was a shortened version, I had missed this uncommon cow. I thought. But from the internet I learned that Imogene the (sometimes two-, sometimes four-horned) cow originated from a later moment, the stage adaptation in 1902, and not from the novel The Wonderful Wizard of Oz which had been written in 1900.
So I am educated thanks to mail art! And we will learn even more, by watching Eva's new mail art project which is about the Wizard of Oz!

Hereby everyone is invited to join one of her - or both! - postal projects: the VQR Postal Project, and the Oz Postcard Project. 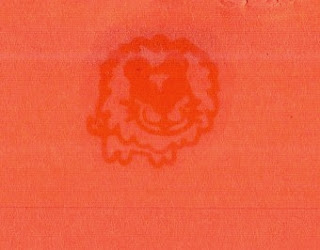 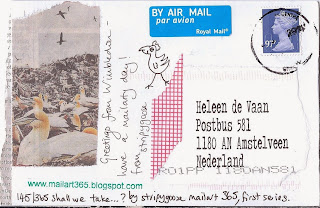 After the first Sula, more Sulidae arrived now.
On the front side of the mail art card even more birds: Chickens! With an invitation to go for a walk. Always a good idea, because outside there are many more beautiful birds to see and hear. However, so far I am happy with these ones Stripygoose has sent me from the United Kingdom. 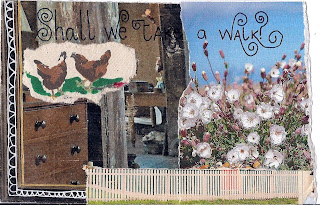 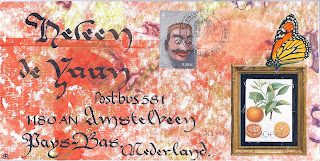 Richard Baudet sent this mail art for the IUOMA group 'Orange Lovers'. However, the beautiful butterfly is an amazing creature and deserves room in this blog, of course, too.

On the back Richard wrote colourful words in his great handwriting, words which we, mail artists and post lovers, fully agree with: thank you, postmen/postwomen!
And thank you, merci beaucoup, Richard! 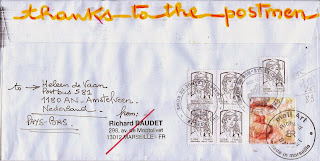 Twenty-four Cats, and when you look close, twenty-four different colours in one mail art!
Created and sent from the United Kingdom by Scott Thomson (Positively Postal, see also here). 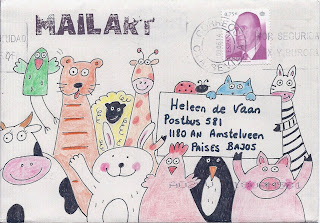 A variety of animals, wonderfully drawn by Eva, who also choose a suitable postcard from the Puffin series. 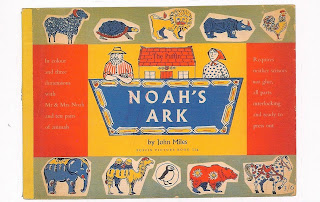 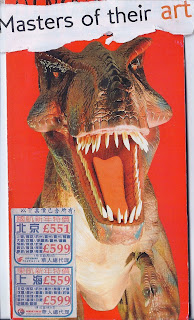 A dangerous and prehistoric looking reptile, but I'm sure she's a creative creature. Mail art created and sent by Artist in Seine. 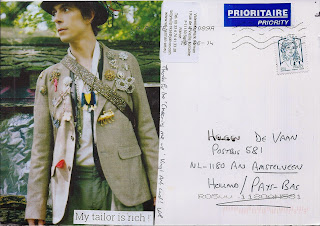 Along this animal, a lot of cyclists also were sent by Dean. This time from the United Kingdom, which of course makes us wonder why the Tour de France is called the Tour of France, and not the Tour de Royaume-Uni-et-France this year? 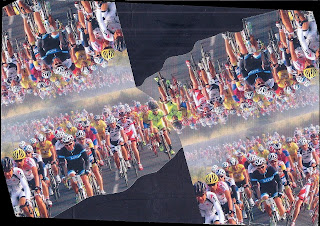 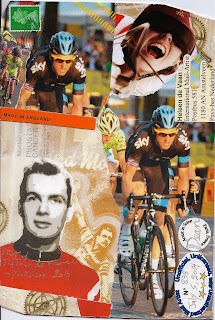 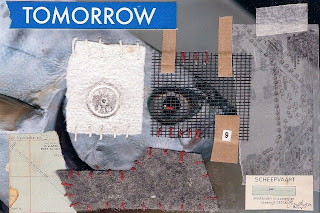 Received from Jack Oudyn from Australia.
On the one hand this fish has no tomorrrow, on the other hand he or she will be eternal. That is, as long as the internet exists.

The fish came along with more beautiful pieces of collage / mixed media art, among them this interesting image of a human being: 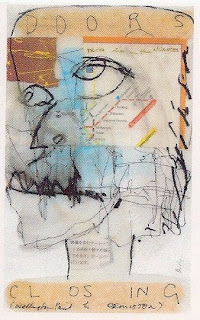 And an announcement of an exhibition in the Redland Art Gallery.

More art work by Jack Oudyn you can find on his website and weblog.

Thank you very much, Jack!