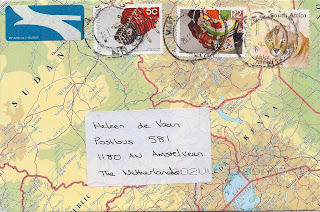 Alison from South Africa created this beautiful envelope. See the Ladybird on the postage stamp! And a Caracal, and of course the Air Mail Bird.

Inside this envelope she sent a nice letter, accompanied by the postcard you see below. Speaking about South-African animals, usually the 'Big Five' come into mind. And the Giraffe, and Zebra.
However, there are of course many more animals. Among them these 'Ugly Five'. 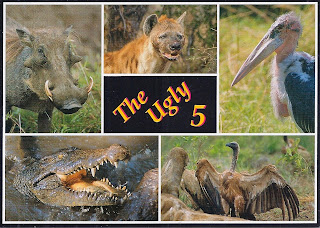 I think these 'Ugly Five' at least as interesting as the more well-known African animals. They usually have a bad image, not only for their appearance, but also their behaviour is thought to be bad. Which is exaggerated by negative propaganda by movies like the Lion King (o.k. the Warthog has got a more sympathetic imago by this movie).

The 'Ugly Five' are very important animals in the whole circle of life. What would we do without them? How would the landscape look like, without these weird useful creatures? The Hyena and Crocodile allow herbivores to not starve from hunger, by eating some of them. And the Hyena, Marabou Stork and Vulture are the cleaners of the savannah.
And the Warthog, well, it's just a cute animal, holding the tail as an antenna when he/she runs around.
Gepost door Heleen op 12:40